I got a chance  last week to hang out with fellow developers at the AnDevCon 2013 in Boston. This was the first time for the event to be held in Boston and went pretty well. Though the hotel staff apparently wasn’t too concerned with safety (see attached pictures). It always amazes me how many other Android developers are out there and just as passionate about the platform as I am (if not more). The week on the east coast was filled with classes and keynotes that probably some of the most meaningful outside of Google I/O. There are different types of classes for everyone, it’s a shame that you have to make choices of which classes to attend and which ones to miss. This was also my first time speaking at the conference. Getting apps in cars was still the main focus, I wanted to give an overview on the state of the industry as well as giving developers a few hints on getting their apps ready for the car. I got a chance to get a little more technical with my presentation and I found it easier to talk with other developers about the subject.

A few of the classes really helped me out with things that I have been a less than great at. My favorite by far was a class put on the Vice President of Engineering at Apkudo on hacking apps for fun. I have been able to decompile apps but not really do much from there. It was really awesome being able to inject code and see how you can make changes to apps. His class specifically showed how to save SnapChat pictures without notifying the sender (very scary). Other classes that really helped were ones based on UI. Android has a very complex set of UI components that are not only difficult to master, but there are tons of them. Mark Murphy’s class on Page Viewer was a great overview on how to use a key component in UI development.

The conference couldn’t end without me teaching developers about “car mode.” Although my class was towards the end of the conference, even after all the prizes were given away, there was a good turn out for this niche topic. Even convinced a few to sign up with Livio Connect during the presentation. I kept the class short on slide material and tried to have more of a conversation with Q and A with the attendees. I wanted to make sure they got what they wanted out of the class and most people seemed to enjoy that format. 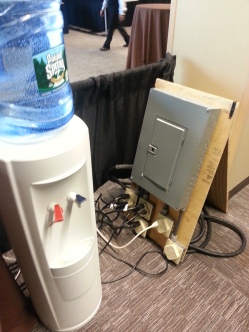 Safety? Psh… Don’t be a pansy!

All in all it was a great time and a good experience. This conference actually runs twice a year, however, I think developers only need to go once a year since some of the classes are the same and don’t get refreshed that quickly. The new location in Boston,MA was interesting. There was a good turnout, still a bit short compared to the San Francisco scene, but I would call it a great success for a new area. AnDevCon returns to be one of my favorite mobile developer conferences and can’t wait to return next year.

I am an engineer currently working in the software realm. I have a passion for being on the bleeding edge, improving myself, and pursuing my goals. I will never become complacent with the world around me. I will always push forward.
View all posts by joeygrover »
« Previous post
Next post »